Customer Reviews
Much better products than others. Water treatment technology is the best. Reliable factory and products. Will cooperate for a long time.

Thank you for the professional service and the delivery time was very punctual. Even better than we ordered from others. Cooperation is very satisfactory and we are very willing to continue long-term cooperation.

The sodium hypochlorite generator has been running for more than half a year and so far no failure has occurred. The product is very good. I am surprised at the low cost and fast delivery. It is totally out of my expectation.

Electrolyzed water come in many forms. The purest Hypochlorous Acid (HOCL) is pH neutral (pH 5.5) a.k.a. super-oxidized water.
HOCL is water that has had an electric current passed through it, thereby generating oxygenated water. This is an electrochemical (or oxidation-reduction) process. Specifically, it is an electrolysis process. This oxidation-reduction process is also known as Electro-Chemical Activation (ECA Technology).
In the early development of “Super-Oxidized Water”, electrolytic cells were only capable of generating small volumes of HOCL with a limited shelf life. In recent years, HOCL has been introduced as a high-level disinfectant, not corrosive and able to penetrate cell membranes more easily in comparison with Sodium Hypochlorite.

Electrolyzed strong acid water is generated on the positive pole of the electrolytic cell when a sodium chloride solution below 0.2% concentration is electrolyzed in the cell having a diaphragm, and strong alkali water is generated on the negative pole.
Unlike other electrolytic cells, here a diaphragm separates the Anolyte and Catholyte that are generated respectively at the anode and cathode chambers of the cell. This prevents the two streams from mixing and inter-reacting to form a simple sodium hypochlorite solution as is the case with other electrolytic cells commercially available now.

Established safety
Designated as a food additive by the authorities concerned, it is a safe sterilizer widely used in a variety of related industries. Quick in killing bacteria and leaving few residues.
Generating a significantly lowered amount of chlorine gas in the worksite where a huge amount of water is used for a long time.The level of trihalomethane (which sharply increase in solutions over pH10) generated is lower than even tap water. Giving no influence on food tastes and smell, it is ideal for sterilizing such non-cooking food materials as fruits and vegetables. It hardly destructs the nutritive elements of foods including vitamins

Convenience and cost-effectiveness
One-touch control function guaranteeing an easy and safe operation Full-automatic and continued water discharge to be used like tap water Cost-effective as it uses water and table salt only Decreased management expenses associated with the risks of handling chemical agents Requiring no troubles of mixing with other types of solution No metal corrosiveness, decreasing the unnecessary costs

Excellent Eco-friendliness
Electrolyzing water and salt only, it does not affect the environment. Upon contact with organic matters upon discharge after use, electrolyzed water rapidly losses its value of effective chlorine, losing most of its activity while flowing to the water treatment facilities. 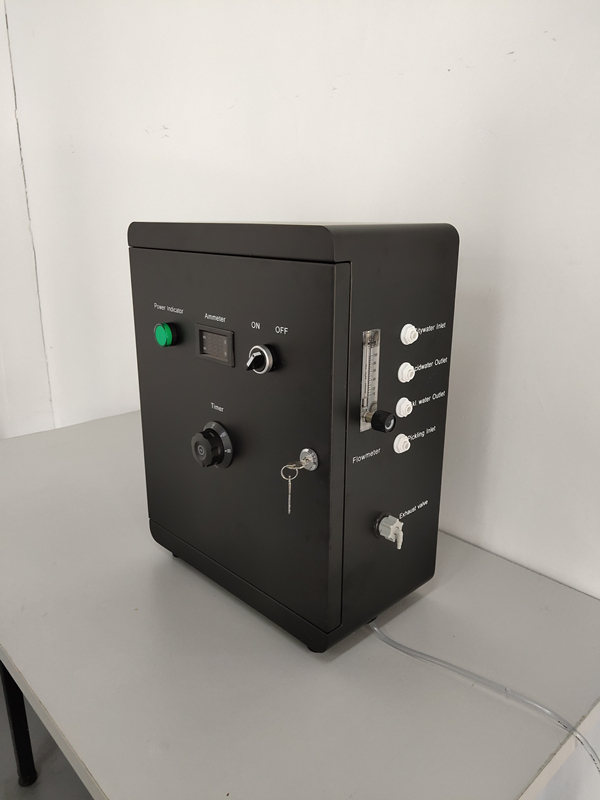 Our engineers went to Brunei to install and commission